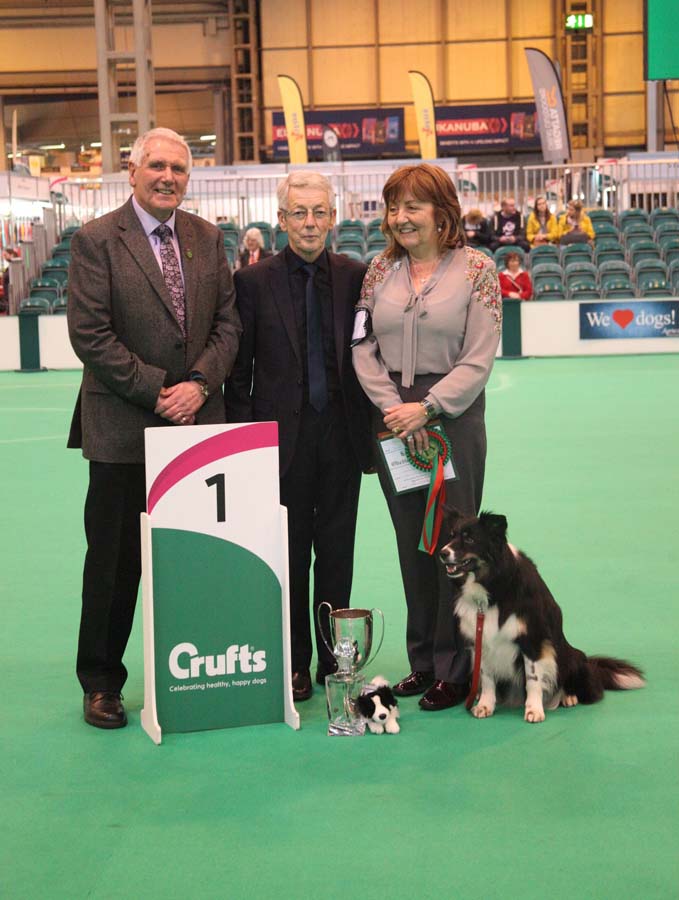 I would like to thank the Kennel Cub for the invitation to judge the 2017 Crufts Obedience Championships. This is the crowning event of the obedience calendar and I feel honoured and privileged to have judged some of the best obedience dogs in the country. Thank you to Richard Kebble and Steve Rutter for all your efforts and support in the run up to, and during Crufts, a lot of work gentlemen and much appreciated, also my thanks to Gerrard Paisley ‘the master of the mike’. Great job Gerrard.

To facilitate judging the Championships required the help and support of eight wonderful people who were absolutely amazing. They have given up so much of their time with meetings, practising, living and breathing Crufts over many, many months through all types of weather, but we have had some great times, with a lot of laughs along the way. No words can express my thanks to you all. My ring steward for both days was Paul Evans who skilfully guided teams through the test, Tina Kimblin was the pencil by my side, again for both days, Alison my lovely wife was in charge of the collecting ring, with Gwyneth Williams in full support, Stephanie Evans was in charge of the retrieves, and Stewart Kimblin was busy running to and fro with the scores. Jan Tootall was in charge of the scoreboard, and watching over us all with his meticulous eye was Keith Wall our ring Manager. What a team they ran the whole show like clockwork. Normally I wouldn’t single out any individual but I must on this occasion Pick out Paul for a special mention as its just 12 months since his terrible illness. He insisted that he was still going to be on the team and his determination to be with us at Crufts was just incredible and it was a very emotional moment for Paul and indeed all of us when he walked out on to that green carpet.

Thank you must also go to Lou Jackson, Lyn Tozer, Malcolm Webster, Shirley Owens and Jane Levell for walking the round many times for us, and Emma Lavender, Rachel Cudworth and Shirley once again for doing the rehearsal on Friday evening. Final thank you to Rachel Birchall and Emma Hughes for volunteering on the last minute to double as handlers for the Arena Demonstration.

I set a test which I hoped would be both interesting for Handlers and spectators alike. The heel work course was not over long but was designed to be testing for dog and handler and demanded the highest level of team work. Crufts however is a unique show and as such always has many variants for dogs and indeed handlers to navigate, and of course some can handle this better than others. Most coped admirably with the test with some superb teams coming to the fore and some letting nerves get the better of them. The dogs on Saturday, all executed the Sendaway without any difficulty, and there were four teams who missed a position in ASSD, all teams successfully completed Distant Control. Scent took its toll with 7 dogs failing. The Bitches on Sunday were a little more unsettled possibly because the handlers seemed in general to be more nervous. The Sendaway was more problematic, two teams missed positions in DC and 5 missed a position in ASSD. Once again scent took its toll with 5 failing. All of you should be proud of what you and your dogs have achieved at Crufts this year and from myself and the team we wish you all the very best of luck for the coming season. Now the results:

1 st and CC Karen Davies and Ob Ch STILLMOOR CELTIC BANNER OW What a fabulous team Karen and Lolly make, they interpreted this test brilliantly, calm smooth handling producing heel work of the highest quality, with Lolly maintaining her position throughout the test. The set exercises were all but perfect. It gave me so much pleasure to award you this, the ultimate accolade, now go and enjoy!

Reserve CC Mary Ray and SARKAM SINGS THE BLUES What an incredible Crufts Mary has had, third yesterday with the ‘elder statesman’ and reserve today with the ‘baby’. At only three years old to produce work of that quality in this atmosphere is amazing. The heel work DC and sendaway were on a par with the winner, with just the retrieve being a little costly. Many congratulations ( we watched her later in the arena Mary she was fabulous)

3rd Madge Thompson and Ob Ch FOREVERMAGIC IT’S TRENDY What a way to bow out and retire, Madge and Trendy producing an excellent round giving a fitting end to a successful obedience career. Many congratulations Madge and I hope she has a happy and well deserved retirement.

4th Pat Watson and Ob Ch FOREVERMAGIC IT’S FLICKER Yet another almost 11 year old producing some super work . Flick worked her socks off for you Pat and you really handled her well. Excellent teamwork. Many congratulations.

5th Philomena Barnes and Ob Ch BHEINN BEWITCHED Jezzie another of todays retirees but still thoroughly enjoying her work, coupled with Phils excellent handling they produced a super round. You must have been very proud of her Phil, and it’s great to see you retiring her while she’s still enjoying herself. Many congratulations.

6th Jane Bint and Ob Ch JANJOY JUMPIN JARO Danni is yet another 11 year old belying her years but still showing the enthusiasm of a dog half her age. An excellent round beautifully handled by Jane and well worthy of this place. Congratulations.

I would like to finish by commenting on two quality rounds both of which could possibly have been in the lineup. One being Sue King and Nifty who produced a fabulous round on Saturday, and on bitch day Caroline Eley and Tangle producing some stunning work. Both teams competing for the first time at Crufts. Alas both failing scent. Scent did play havoc over the two days, maybe we could put it down to the air con which kicked in around stay time on both days and remained on throughout scent and the air was moving quite fast. Having said that I think we should all be used to working in windy conditions ‘this is the UK’

This site uses Akismet to reduce spam. Learn how your comment data is processed.